Something I always tell people: Don’t go into writing books for the money, because there’s a lot less of it than you’d think. Sure, books are worth writing and publishing, enough so that I put a lot of effort into both writing and editing them. But for those of us who aren’t J.K. Rowling, say, you’d be amazed at just how little money can change hands over it.

Case in point is the annual royalty statement from University of Texas Press that hits my mailbox every year around this time. I have a small back-end interest in the books I’ve brought in to the American Music Series at UT Press, and a few of them have “earned out” — sold enough to recoup their advances and generate back-end royalties. Valhalla!

It comes to a few hundred dollars every year, which is good to have and I’m happy to get it. No, it’s not a living or much of a contribution to the retirement account, but every drop in the bucket helps here on Planet Freelance. The work is still fun to do, and it’s satisfying to feel like I’m involved in putting good things out into the world. That’s still more important to me than money.

But yeah, this is the time of year I pay attention to the money, especially since I have an even more direct rooting interest in one of those UT Press titles — because it’s a book I wrote, “Ryan Adams: Losering, A Story of Whiskeytown.” It was published way back in 2012 and did pretty well; sold decently by university-press standards while picking up mostly (but not unanimously) positive reviews and even winning an award. 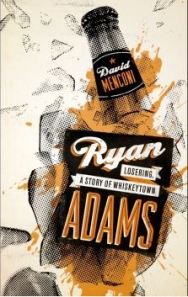 Naturally, I still feel like it could have done multiples more in sales if I’d caught a break or two — a review in the right place, the right person tweeting something about it at the right time — but that was not to be. All of which is to say that, while I’m still proud of “Losering,” it has yet to earn out and get to the promised land of back-end royalties.

But man, it’s close. By my back-of-the-envelope calculations based on this statement, it needs to sell only around 40 more copies to get there.

In the wake of that bombshell New York Times feature back in February, which accused Mr. Adams of various #MeToo misdeeds, his career pretty much came to a full stop. He was to have released three albums this year while touring the world, but that was all canceled.

It’s hard to tell if this is going to be a temporary lull or a permanent ban for Ryan, or if he has it within him to do what needs to be done for him to resume his career. I’ve not been able to bring myself to listen to his music since the news broke, which leaves me with profoundly mixed feelings. But in the grand scheme of things, the fate of my little university-press book on Ryan is an insignificant little blip. This time next year, I kind of expect it will still be in “Unrecouped” purgatory. So it goes.

Meanwhile, I’m just about done with my next book — this one for UNC Press, a history of North Carolina music — which has been my main side-hustle project for close to three years. There have been times when it’s felt like a sanity-keeping labor of love, others when it’s felt like an anchor I’m lugging around. But it should be done and dusted by the end of this month, with publication to follow in fall 2020.

The advance is just about the same amount I was paid to write “Losering.” Maybe this one will take less time to earn out.

1 thought on “Dollars, cents and sense of book-publishing”