From left, Eric Heywood and Alejandro Escovedo onstage Sunday, May 18, 2019 at Artsplosure in Downtown Raleigh.

Alejandro Escovedo played in Raleigh Sunday to close out this year’s Artsplosure Festival, a show that had a few things working against it — wilting late-day heat, the not-great acoustics of loud music in outdoor spaces, weariness after an all-night drive down from New York and a pickup lineup not entirely familiar with all the songs in the setlist.

“We’re, uh, loose today,” Escovedo quipped at one point after a false start.

As usual, however, all he had to do was start singing and everything was all right. I’ve been going to see Escovedo shows since I was a University of Texas grad-school student in my early 20s, and he’s been maybe my biggest musical, personal and critical constant through three-plus decades. I’ve written about him all over and seen him more times than I can count — playing in nightclubs, theaters, restaurants and living rooms as well as the occasional street corner. And the next time one of his shows leaves me unmoved will be the first. 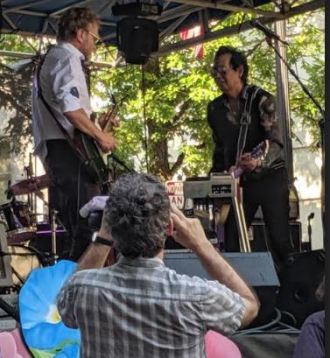 And that’s me, taking pictures. Photo by Billy Maupin.

I actually find him not terribly easy to write about, simply because my emotional response to his music tends to be along the lines of: If you get it, no explanation is necessary and if you don’t, none will suffice. While I have been, at best, an irregular church-goer as an adult, Escovedo shows are among the closest church-like rituals I have —  not in the sense of worship, but compass-setting. His voice and songs resonate on my particular wavelength more than just about anyone else, and going to one of his shows always feels like bumping into my younger self.

Given the abbreviated outdoor street-festival setting, this wasn’t the full-on epic that Escovedo’s late-night shows can be. But over the course of an hour and 13 songs, most of them recent and focused on his latest album The Crossing, he evoked the journey we’re all taking, and rocked it up.

Not surprisingly, a lot of the newer songs were angry — and how could they not be, given Escovedo’s immigrant roots and what a hot-button issue the U.S. Southern border is nowadays? Songs from The Crossing blazed, especially “Fury and Fire” (written, Escovedo said, in response to Donald Trump’s race-baiting 2015 presidential-candidacy announcement) and the snarling “Teenage Luggage” chorus of, “You think you know me/You’ll never know me/You’re a bigot with a bad guitar.”

But I found myself responding more to “Always a Friend,” and the more personal, upbeat songs. There’s always one moment at an Escovedo show where everything in my world feels like it snaps into place, and this time it was the oldie “Castanets.” A smoking rocker with a Chuck Berry-style guitar riff for the ages, “Castanets” was recorded close to two decades ago right here in North Carolina — produced by Chris Stamey, with Mitch Easter on lead guitar. Eric Heywood ably played it this time, and it was spectacular as always.

The melding of North Carolina and Texas felt like a personal bonus, for those who knew.