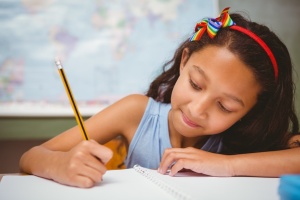 One of the great joys of working with young authors is that their voices have yet to be shaped by disappointment, cynicism, or the expectations of strangers. Their imaginations are still on overdrive, unsquelched by the weight of everyday responsibilities, and they give voice to their imaginations with a delightful and unadorned boldness.

I was reminded of this over the past month as I read through the submissions of a young writers contest the Piedmont Laureate program sponsored at www.summersleuths.org. The assignment was to write a mystery or crime fiction short story and a few prompts were provided to get kids thinking. But most of the authors opted to submit stories based on their ideas. I was blown away by their creativity as well as the quality of their writing.

Sometimes the subjects were familiar: being late for school, moving to a new town, or the usual fears of childhood like fitting in or losing a pet. But they approached these topics with such elan and a cheerful enthusiasm for catching the bad guys that real law enforcement can only hope to emulate. Bus drivers, little old ladies, jealous friends, and others became villains, but many of the authors pointed out that, at heart, these villains still had good in them. Just as often, they would write about a situation where they were afraid of something, only to reveal later that they had simply misinterpreted what was going on. I love this view of the world: that no one is all bad and that we all have the resilience to overcome our fears. We just have to adjust the way we look at them.

Nearly all of the young writers excelled at creating a mood in their stories. One atmospheric submission spoke of monsters outside the window, describing a gradual increase of fear with a sparse, moody elegance I greatly admired. Other stories captured the loneliness that comes with being new to a classroom or town, or the loving interplay between child and parent. Are you wondering whether kids really hear what you say to them? Wonder no more: their ear for dialogue is astonishing.

These are kids who are paying attention to the world. These are young authors who are learning from what they see. ­­I would take nine billion of them.

Some stories were concise, others ran on and on -– leaping into different time periods and new worlds with endless energy and unpredictable creativity. May every page I write have that much joie de vivre. We could all use a little excess.

One young man even wrote a beautiful homage to British police procedurals; I wanted to call up his parents and salute them on their television watching policies. He captured the loneliness of responsibility that comes with being a senior detective who makes the decisions, the aching fear of making the wrong decision, and the price that comes with making a mistake. Somehow, this young man conveyed the essence of many a PBS series and he’s just 11 years old. Well done. He’s not just observing the world, he is absorbing it.

And unlike adults, faced with a crime, these young writers were not so concerned with dispensing justice. Bad guys might be captured, but they weren’t necessarily punished. There was little need for retribution. I rather liked this relaxed approach to good and evil. It signified a belief in the universe and its own ability to balance good and evil that I would like to embrace.

Most of all, I came away impressed with the power that stories have on our lives. These are young people raised on narratives everywhere they look, from the television commercials they see to the subjects they are taught in school, to the endless parade of books, movies, and shows that have shaped their lives. This consumption of stories has clearly made them storytellers — the advanced structures of these stories show this clearly. That gave me hope and underscored my belief that, going forward, in a world of sound bites, it will be shared stories that bind us.