As the entire reading world obsesses about the new Harry Potter — certainly, the first time in my life time that so many people have cared about reading the script to a play — my thoughts have turned to Gone With the Wind, not only because it was the blockbuster of its day but also because, when you think about it, it is a sort of sorting hat for literary tastes. I have found that how you react to the characters in GWTW can not only tell you a lot about yourself, it can also tell you a lot about the direction you should go in as a writer or reader. I have cleverly tested my theory in bars across America as I meet with other book lovers and I am pretty sure I am on to something.

Let’s start with the obvious: Scarlet. Here is a narcissistic, spoiled woman-child who toys with peoples’ emotions, treats her maid abominably, is equally dismissive to her own mother, manipulates her father in an über-Freudian fashion, obsesses over the one man she can’t have, and blithely steals her sister’s lifelong suitor for a little bit of change in the bank. Certainly, Scarlett had strength and determination. And held her family (if not the entire county) together after the Civil War. If her strength and quest for romantic fulfillment is what captivates you about her, then chances are good you are either a romance writer or into women’s fiction. On the other hand, if all you can see when you think of Scarlet O’Hara is a long line of victims toppled behind her like bowling pins and cannot help but think that she would have made an excellent serial killer, chances are good you are into crime fiction. As for myself, I can only tolerate Scarlet by pretending that we finally find out what happens to her in Streetcar Named Desire, when Blanche DuBois is led away in a coquettish delusional state by a version of the proverbial men in white coats. 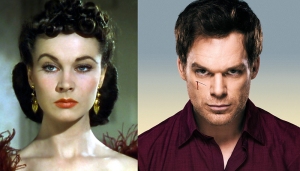 Ashley Wilkes is another good litmus test. It is safe to say that all southern women fall into one of two categories: those that swoon over Ashley Wilkes, and those who prefer Rhett Butler. For me, the choice is easy. Sure, Ashley Wilkes is genteel and noble on the surface, but he doesn’t have the cajones to tell Scarlet to leave him alone, he sits around moping an awful lot for a man in the middle of a major war, he’s atrociously unhelpful when Melanie is dying, and he even gives in and kisses Scarlet when he knows that he may as well have been waving the starting flag in front of Dale Earnhardt. In short, he is too indecisive and weak for my taste, and though I loved him when I was very young and found most men loud and scary, I have little patience with him now that I am older. I prefer the Rhett Butlers of the world, though I have no illusions as to their essential character. At least Rhett was honest about who he was, recognized quickly that his love for Scarlet was toxic, stood by Belle Watling with an admirable loyalty, and could get the job done. If you are an Ashley Wilkes fan instead, I am going to go out on a limb and suggest that you are a big fan of either young adult fiction or most men active in progressive politics. We Rhett fans will be over here in the corner enjoying our thrillers and spy novels.

Melanie is another character who inspires revealing reactions by readers. She is generous and selfless, impossibly good, and thus clearly doomed from the start. How could anyone not like Melanie? But there is a difference between admiring her and wanting to be around her for too long. Melanie makes you feel inadequate. Melanie makes you feel mean and small. Melanie would make for an awesome character in a mystery book. Think about it: what if someone was actually lousy enough to whack her? Who could do such a thing? Now that would be an interesting puzzle. Melanie represents the essential good in human beings, and as such probably appeals to readers of all genres. After all, doesn’t every book explore whether people are essentially selfless or self-serving at their core?

Other lesser characters, and how you react to them, can reveal even more about your reading and writing tastes, if not your soul. Let’s take the Tarleton twins. They’re like a pair of dumb Labrador retrievers, tongues hanging out as they pant around Scarlet, fetching her barbecue and vying for a pat on the head and “good boy” from her. You just know that they will be the first to charge into the fray, without stopping to think whether it’s the smart move or not. You know they won’t make it halfway to Fort Sumter, much less Gettysburg. This cynical reaction to the Tarleton twins should have told me, early on, that I needed to go into crime fiction. If you, too, saw it coming but, unlike me, found it a little noble, may I recommend any book by Stephen Ambrose?(Although Stephen Ambrose is one of my all-time favorite authors, just for the record.)

Meanwhile, Aunt Pittypat is the litmus test for whether you are a fan of southern women’s fiction or not. If you find her iconic and endearing, please do not read Flannery O’Connor anytime soon. If you mostly want to slap her and hand her off to the Symbionese Liberation Army, welcome to the dark side. Start with Stephen King and go from there.

My reaction to the death of Bonnie Blue Butler was another clue that I like to avoid the sunny side of the street. The very fact that I could entertain a smidgen of relief that the pony did her in clearly labels me both a horrible person and a crime writer. (Although in my defense, the young actress who plays her in the movie version of GWTW is so abominably coiffed and overly cute in that saccharine 30’s kind of way that I think probably everyone should get a pass on cheering for the pony.)

Finally, we must discuss the characters of Mammy and Prissy, the O’Hara family’s house servants (and by that, the ending credits designer surely meant SLAVES). I never understood the need for comic relief in an otherwise utterly serious tale — I almost threw tomatoes during Keeper of the House in Les Miserables — and I certainly do not understand making these two, of all people, the comic relief in GWTW. I think the only sane reaction to their characters is to watch Django Unchained every time you watch GWTW in order to balance out the moral scales of the universe.

Try this literary sorting hat for yourself. Think of the characters in Gone With the Wind and your reactions to them. Then stop and marvel that fictional characters can reveal so much about you. Stop and give homage to authors who are able to create such iconic and evocative characters that people talk about them for decades, if not centuries. Then give those authors the due they deserve, whether it is Margaret Mitchell, JK Rowling, Shakespeare, or someone else whose characters haunt you. Because characters capable of striking deep chords within readers are the hallmark of great books. If you’re a writer, remember that. Take the time to build and get to know your characters before you even start to write your book.

How do you feel about the characters in Gone With the Wind? Who are some of your most memorable characters in literature? Your favorites and your least favorites? I’d love to know which characters speak to you and what they tell you about yourself or the world.