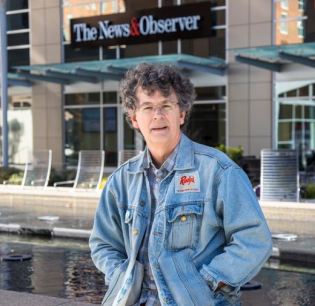 Well, folks, I guess it’s time for me to make it official: After 28 years, I am leaving the News & Observer at the end of this month.

February 28 will be my final day there, after which I’ll join this latest exodus from the newsroom. I’ve been at the N&O long enough to become part of the furniture, as the saying goes. The thought of leaving it behind makes me feel…well, a confusing rush of emotions.

Anxious and scared, for starters, especially over non-trivial matters like what we’ll do for health insurance. Bereft, kind of heartbroken, crushed — that starts to cover it. You’d think 28 years would be long enough to stay anyplace, especially when the job has changed as much as this one has. And yet part of me is still not ready to let go, even though this is a voluntary separation. But the only thing that feels “voluntary” about it is the timing. More layoffs and cutbacks seem inevitable, sadly, so at this point it’s jump or be pushed.

At the same time, I have to admit there’s a certain amount of relief to it, too. I’ve been expecting and dreading this for so long, trying to hold it off while living under a sword, and now it’s finally here. The bloodletting in my world began in the spring of 2008, when the bottom dropped out of the world economy and hit print media especially hard. Other sectors of the economy recovered, eventually, but print never did. Making our situation even more dire, the N&O’s corporate owner McClatchy had taken on billions of dollars worth of debt in a merger not long before the crash.

Between steadily declining revenues and lingering debt, we’ve been spiraling downward ever since. More than a decade of layoffs, buyouts and attrition whittled our once-mighty newsroom staff of 250 down to around 40 survivors. I am as surprised as anyone else that I’ve lasted this long. All of us have felt immense pressure to produce, especially during the newsroom’s series of “digital-first reinvention” initiatives the past two years. We’ve given our best, all of us, even as some of us have handled it with more grace than others. I’ll cop to having thrown a tantrum or two, and I’m not the only one. It’s been difficult.

I’m sure I’ll have plenty more to say about this later. Right now I’m still trying to process it in a way that focuses more on being glad it happened than sad that it’s ending. And I’m having trouble figuring out how to say goodbye to a place that’s been home for most of my career. In all probability, this will be the end of me as a full-time journalist, which feels like having an arm torn off. I’m kind of not sure who or what I’ll be after this. I’ll definitely still be writing in some way, shape or form, and not just because I’ve got a book to finish. For better or worse, writing is not something I can stop.

At the very least, I’ll still be posting on this blog through the year. I’ll also be doing my radio show, and Piedmont Laureate programs — maybe one on job-hunting (ha ha ha). Obviously, this is profoundly awkward timing and not what I would have picked for my time as Laureate. I had hoped this year could be one of opportunity for the paper as well as for me, but it doesn’t look like that’s going to happen.

If there’s a silver lining to the dark cloud of my imploding career, it’s that this might be an interesting transitional period to share as I try to figure out whatever my “next thing” will be. I don’t like to think too much about it, but it’s very possible that writing is going to become more sideline than primary means of support. We’ll see. At this point, I really don’t know.

Stick around and I’ll let you know how it’s going. Support your local newspaper, wherever you are, because it’s important. Come out and see me at the North Carolina Book Festival this week. And come to my going-away party — the afternoon of Saturday, March 2 at Kings in Raleigh.

Meantime…I loved being the News & Observer’s music critic for so long, more than I can say. It’s been an honor and a privilege, the time of my life.

I’ll be seeing you.